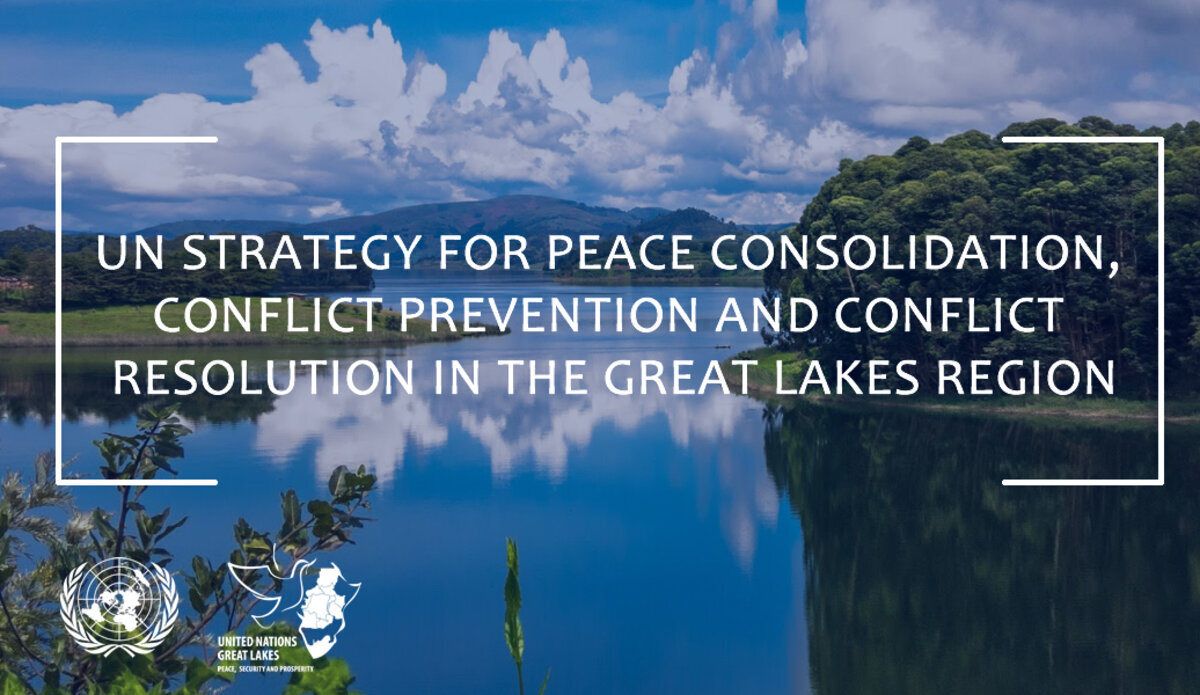 SIX QUESTIONS ABOUT THE NEW UN STRATEGY FOR THE GREAT LAKES

On 22 October 2020, Secretary-General António Guterres approved the United Nations (UN) Strategy for Peace Consolidation, Conflict Prevention and Conflict Resolution in the Great Lakes region. The Strategy, developed by the Office of the Special Envoy for the Great Lakes region in consultation with a wide range of stakeholders, including representatives from the countries in the region, proposes an integrated, forward-leaning approach that aims to better leverage the political, operational, and programmatic expertise of the UN in support of a peaceful, inclusive, prosperous, and resilient region. While prioritizing political solutions, the Strategy advocates for a shift in narrative beyond the traditional focus on conflict-related challenges that emphasizes opportunities for peace, security, and people-centered development. It puts forth ten priorities, structured around three pillars, which are to guide UN engagement in the region, in line with the 2030 Agenda for Sustainable Development, while also informing specific and immediate priority actions in the next three years.

1. Is the Strategy just another document that is only about the UN?

The Strategy centers around the communities, peoples and countries of the Great Lakes region and their common aspirations for greater stability, peaceful relations, sustainable development, and resilience. It places these aspirations at the heart of UN action in the region and explores how to best leverage the comparative advantages of the UN to support the governments and peoples of the region in their efforts to attain their priorities and objectives, including those consigned in important regional and international instruments and agreements such as the ICGLR Pact signed on 2006 and the Peace, Security and Cooperation Framework signed in 2013.

2. What are the main priorities of the Strategy?

The Strategy strives to leverage the comparative advantages of the UN across different fields – from peace and security to human rights and development – in order to facilitate transformative change in critical areas. To that end, the Strategy identifies ten priorities organized along three pillars:

Pillar I: Peace, security and justice

3. Are all the other priorities which were previously identified in other instruments and framework now obsolete?

The priorities in the Strategy are intended to respond to regional aspirations and internationally agreed goals – so they echo priorities and objectives which have been previously identified instead of attempting to replace them with new ones.

In this regard the Strategy’s priorities are firmly anchored in the Sustainable Development Goal framework and the 2030 Agenda. The Strategy also builds strongly on instruments which are the legal backbone of political dialogue and regional cooperation in the Great Lakes region, such as the the Pact on Security, Stability and Development in the Great Lakes Region of 2006 and the Peace, Security and Cooperation Framework for the Democratic Republic of the Congo and the Region (PSC Framework) of 2013. Lastly, it is also worth noting that the Strategy is not meant to replace existing programmatic frameworks and mechanisms at the regional and national levels, but rather to provide an overarching political umbrella for UN interventions while creating synergies for stronger impact on the ground.

4. How do we know if the Strategy has been successfully implemented?

The UN will have achieved the objectives of the Strategy, if it succeeds in helping the countries of the region attain their common aspirations for greater stability, peaceful relations, sustainable development, and resilience. These will include, among others, enhanced trust, weakened/neutralized armed groups, more inclusive political and economic processes and strengthened capacities at the national and regional levels, across the Strategy’s three pillars. Also, one would expect to see more interactions between key actors through established mechanisms, including in the context of trust-building initiatives, cross-border projects and the diplomatic resolution of differences.

To get there, the UN will have to ensure an even more cohesive and coordinated action in the region, while building on expanding its engagement with key stakeholders, including governments, international partners, civil society, women, youth and the private sector. Furthermore, it will also be critical to secure and maintain the ownership and political will of countries of the region as well as the (technical and financial) support of strategic partners of the region.

5. And when is all of this going to happen?

The Strategy has a 10-year timeline, which is aligned to the timeline of the 2030 Agenda and seeks to grant sufficient time to address issues of a systemic nature which require a long-term perspective. However, simultaneously, the Strategy also proposes an incremental and sequenced approach which breaks down this 10-year timeline in an initial three-year time frame which will focus on the implementation of prioritized and well-sequenced political and programmatic interventions.

6. What are the next steps?

Since the adoption of the Strategy, UN entities in the region have been focusing on the development of an action plan through an inclusive and participatory process and extensive internal and external consultations. The action plan will be guided, first and foremost, by the priorities of the countries and organizations of the Great Lakes region and existing UN partnerships with them. To implement the action plan, the UN will build on its large and varied presences in the region and its capacity to link high-level engagements with bottom-up approaches. To prioritize lasting and tangible impact, the UN will also invest in lean, agile and efficient coordination, and decision mechanisms to facilitate the implementation of the action plan.